The ancient Olympic Games were primarily a part of a religious festival in honor of Zeus, the father of the Greek gods and goddesses. The festival and the games were held in Olympia, a rural sanctuary site (model shown here, courtesy of the British Museum) in the western Peloponnesos. 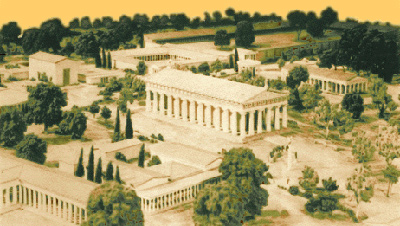 The Greeks that came to the Sanctuary of Zeus at Olympia shared the same religious beliefs and spoke the same language. The athletes were all male citizens of the city-states from every corner of the Greek world, coming from as far away as Iberia (Spain) in the west and the Black Sea (Turkey) in the east.

The sanctuary was named in antiquity after Mt. Olympos, the highest mountain in mainland Greece. In Greek mythology, Mt. Olympos was the home of the greatest of the Greek gods and goddesses.

The ancient Olympic Games began in the year 776 BC, when Koroibos, a cook from the nearby city of Elis, won the stadion race, a foot race 600 feet long. The stadion track at Olympia is shown here. According to some literary traditions, this was the only athletic event of the games for the first 13 Olympic festivals or until 724 BC. From 776 BC, the Games were held in Olympia every four years for almost 12 centuries.

Contrary evidence, both literary and archaeological, suggests that the games may have existed at Olympia much earlier than this date, perhaps as early as the 10th or 9th century BC.

What’s that you ask?
A series of bronze tripods have been found at Olympia, some of which may date to the 9th century BC, and it has been suggested that these tripods may in fact be prizes for some of the early events at Olympia. Source: Deutsches Archaologisches Institut, Athen

The marathon was NOT an event of the ancient Olympic games. The marathon is a modern event that was first introduced in the Modern Olympic Games of 1896 in Athens, a race from Marathon northeast of Athens to the Olympic Stadium, a distance of 40 kilometers.

The race commemorates the run of Pheidippides, an ancient “day-runner” who carried the news of the Persian landing at Marathon of 490 B.C. to Sparta (a distance of 149 miles) in order to enlist help for the battle. According to the fifth century B.C.ancient Greek historian Herodotus, Pheidippides delivered the news to the Spartans the next day.

The distance of the modern marathon was standardized as 26 miles 385 yards or 42.195 km. in 1908 when the Olympic Games were held in London. The distance was the exact measurement between Windsor Castle, the start of the race, and the finish line inside White City Stadium.

Nudity At The Games?

There are two stories relating to the question of nudity at the ancient Olympic Games. One story states that it was a runner from Megara, Orsippos or Orrhippos who, in 720 B.C. was the first to run naked in the stadion race when he lost his shorts in the race. Another tradition is that it was the Spartans who introduced nudity to the Olympic Games in the 8th century B.C. as it was a Spartan tradition. It is not clear if the very first recorded victor at Olympia, Koroibos, who won the stadion race in 776 B.C. wore shorts or not. It seems fairly clear that by the late 8th century nudity was common for the male contestants.

From Ancient to Modern

Although the ancient Games were staged in Olympia, Greece, from 776 BC through 393 AD, it took 1503 years for the Olympics to return. The first modern Olympics were held in Athens, Greece, in 1896. The man responsible for its rebirth was a Frenchman named Baron Pierre de Coubertin, who presented the idea in 1894. His original thought was to unveil the modern Games in 1900 in his native Paris, but delegates from 34 countries were so enthralled with the concept that they convinced him to move the Games up to 1896 and have Athens serve as the first host.

The Olympic Oath was introduced in 1920.